On the set of Ghostlight

0tralala
Writer and sometime producer. Co-author of Doctor Who: The Women Who Lived and Buffy the Vampire Slayer: Slayer Stats. Writer of Cleaning Up starring Mark Gatiss and Louise Jameson, The Plotters, Wizard starring David Warner, and Modern Man, and the creator of the science-fiction series Graceless. I've written books, comics and audio plays based on Doctor Who, Blake's 7, Being Human, Primeval, Robin Hood etc. Agent: Steven Russell at Collective Talent

Michael Pickwoad It's very sad to hear of the death of Michael Pickwoad, production designer on Doctor Who between 2010 and 2017. What follows is one half of an interview with him, as submitted. A tidied up version was published in Doctor Who Magazine #476 in July 2014. (For the other half of the interview - focused on his design of the TARDIS interior seen on screen between 2012 and 2017 - you'll need to  buy the digital version of   The Essential Doctor Who: The TARDIS .) A Good Cartoon Production designer Michael Pickwoad has decided the look of every episode of Doctor Who since 2010. He tells DWM how he builds whole worlds… INTERVIEW BY SIMON GUERRIER July 1966. London is under attack from a super-computer called WOTAN – a machine so advanced that, in what was then a thrilling sci-fi twist, it can speak to other computers! Now robotic tanks swarm the streets, smashing everything in their path... “I don't think I watched it,” admits Doctor Who 's 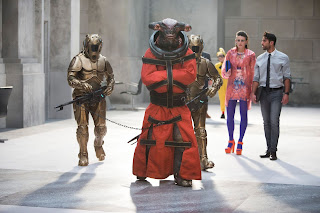 MONSTERS OF THE MILLENNIUM (PART ONE) Prosthetic effects supervisor Kate Walshe of Millennium FX explains how it's her job to completely gross us out... [Published in Doctor Who Magazine #491 (Panini UK Ltd, November 2015), pp. 46-52. Posted here by kind permission of DWM editor Tom Spilsbury.] “The effects are fabulous,” said the Twelfth Doctor himself, Peter Capaldi, in July 2015 while on stage at the huge Comic Con International event in San Diego . “But... people say what was it like, when did you first feel like Doctor Who? I think it was when they threw a rubber spider in my face and said 'Fight it!'” That delights Kate Walshe, SFX producer at effects company Millennium FX . “Ah, that's great,” she says when she's finished laughing. “I'm very glad to have made him feel initiated into Doctor Who .” In fact, Kate's team provided several different kinds of giant spider for 2014 episode Kill The Moon . “We built a puppet version with a mouth t

[Interviewed on stage at the Fairford Festival of Fiction on Saturday, 3 June 2017. Transcript posted here by kind permission of Steven Moffat. Thanks also to Paul Cornell and the team at Fairford Festival.] Steven Moffat and me at Fairford Festival of Fiction Photo by Pea Green Boat Books Steven, I think I'm right in saying that this year's Doctor Who Christmas special has begun production. No, we've got the read-through on Thursday. I'm just doing a new draft at the moment, which I hope to finish tomorrow. I'll get that to the production office for Monday morning and then probably fiddle around with it a bit. Then I think we start shooting a week on Monday. I've misunderstood. So pre -production started a couple of weeks ago. Yes. Once you've finished this draft, what else is there for you to do as head writer on Doctor Who ? Oh, we have to make the show! I mean, it's not that I write it down and we just sort of stop